The Pragmatic Aesthetics of Primer

In Horror Film Aesthetics, I devote much space to discussing what I call "pragmatic aesthetics." This is when a filmmaker puts his financial shortcomings to aesthetic use. For instance, perhaps unable to cast first rate actors for his film, he writes a script about bad actors preparing for an upcoming play (e.g., Children Shouldn't Play with Dead Things).

Primer (2004) is a low-budget science fiction film about quantum physics. The film is noteworthy partially because it inspired a later cycle of sci-fi thrillers about quantum physics (e.g., I'll Follow You Down, Singularity Principle, Third Contact, Paradox [two films with that title, both released in 2016], Anti-Matter, Soft Matter, Collider, and Expulsion). 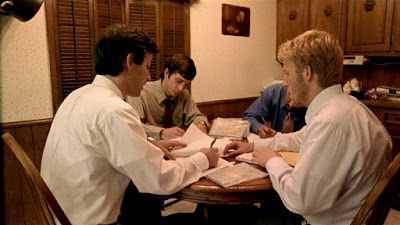 Primer is also an example of pragmatic aesthetics. This was brought to my attention by an IMDB film review written by "flat6":

The reason to love [Primer] is that it's utterly defiant of the expectations of the traditional movie experience.

* It can't resort to a beautiful cast, shiny special effects, gorgeous scenery. Indeed, the cast is wooden in its acting, which turns out to work because that's how normal scientists and engineers (and people in general) are, flawed communicators.

* The settings are drab, out of focus, rushed and cheap, which turns out to work because that's what being efficient with your resources means for an inventor.

It doesn't matter if the makers of Primer were forced into this style by their budget (as opposed to consciously "pulling off" this look and feel). All that matters is that in the end, it turns out to work beautifully with the plot and the story.

Although he doesn't use the term, flat6 makes a pretty good case that Primer makes use of pragmatic aesthetics.

For more information on pragmatic aesthetics in horror films, see Horror Film Aesthetics: Creating the Visual Language of Fear. This blog represents a continuing discussion of my views on horror, picking up from where the book left off.