Art Is Communication, Effective to Varying Degrees But Always Imperfect

I prefer the term aesthetically effective.

Art is communication. In The Cinema as Art, Debrix and Stephenson discuss art as a three-stage process. We begin with (1) the artist's original concept. The message, theme, or work as envisioned by the artist. There follows (2) the work itself. The finished horror film. And finally (3) the audience response. How viewers (or readers, or listeners) interpret the work.

All three stages must exist for a work to be art. An accidentally spilled a can of paint that created the Mona Lisa would not be art, because there was no artistic vision or intent. If an author wrote a book and hid it in his drawer, it would not be art until the first reader read it.

These three stages differ, to varying degrees. The finished work is never as originally conceived by the artist. The audience's response is never quite what the artist intended.

Neither stage is subservient to the others. If an artist intended to write an antiwar book, but most readers interpret the book as a glorification of war, it would be a mistake to say the readers' interpretations are wrong simply because it's not what the author intended. The artist's intent is not the final arbiter as to what a work means.

An art work stands on its own. Interpretation is an asymptotic curve. With each new interpretation (including the artist's intent and viewers' interpretations), the curve of interpretation draws nearer the line of the work. But the two never touch. The greater the agreement on what a work means, the closer the lines are. The more disagreement or diversity of opinion, the farther apart the lines.

If a critical mass of people interpret a horror film as anti-feminist, that film is most likely anti-feminist even if the filmmaker intended a feminist message. I say "most likely" because, as with the asymptotic line, one can never say with finality what a work means. The lines can be very close, or far apart, but they never touch.

When I say that a horror film is aesthetically effective, I mean the filmmaker did a good job of using cinematic tools (lighting, sound, depth of field, editing, etc.) to express his story, characters, and themes. That most viewers will respond emotionally and intellectually in the way the filmmaker intended.

Beauty? Aesthetically pleasing? These are end results, and have nothing to do with the issue of art as effective communication. An artist may intend for his work to be beautiful or ugly, pleasing or repulsive.

SubUrbia effectively conveys the boring, empty, emotionally stupefied lives of suburbia. If director Richard Linklater intended this message, then he demonstrates an effective command of his cinematic tools. The film is ugly and emotionally unsatisfying, effectively supporting the film's theme.

Of course, it may be that some viewers are emotionally satisfied in seeing characters lead emotionally unsatisfying lives. Why? Because it reaffirms their view of the world ("I am right to feel dissatisfied about life.") or because it makes them feel better off ("My life is better than the lives of other people.") If they "get" the message that Linklater intended, then SubUrbia is aesthetically effective.

I was turned off by SubUrbia. I disliked the characters, and did not enjoy the film. But I "got" the message, and empathized with the characters' misery. So for me, SubUrbia succeeded as art, but failed as entertainment. It's the sort of film that one appreciates rather than enjoys. There's a limited market for such films: indie art houses rather than summer tentpole releases.

There are many ways to judge a horror film. Whether it's entertaining, or politically satisfying, or cinematographic beautiful, or creepy, or shocking, or frightening. These factors will affect whether a horror film is pleasing to an audience.

But the issue of whether a horror film is aesthetically effective (did the filmmaker intend to communicate such politics or themes or creeps, or do so by serendipity, or intend the opposite so that it subverts the filmmaker's intent) is an issue that overlaps with, but is separate from, the above elements.

For more about film aesthetics in general and as it relates to horror, and about the specific appeals of horror, see Horror Film Aesthetics: Creating the Visual Language of Fear. This blog represents a continuing discussion of my views on horror, picking up from where the book left off.
Posted by Thomas at 8:51 AM No comments:

In Vacancy, editing creates a false sense of space, which effectively misleads and unnerves audiences.

A killer is chasing David and Amy, a married couple, in an underground tunnel. Because the tunnel is tight, we can't see who is where in relation to each other. We know that David is ahead of Amy, and the killer somewhere behind, but that is all. We don't know how far behind the killer is, or if he can see them.

We see only brief, repetitive shots of David, Amy, and the killer, sometimes from the front, sometimes from behind. Edits are quick, creating a sense of panic. Our inability to know how close the killer is, or whether any of the shots are his POV (point of view), unnerves us. Dim lighting further contributes to the audience's confusion.

We cut to this shot of the killer emerging from a tunnel, and turning right. He appears to be looking at Amy!

This is because this edit creates two eyeline matches. Amy's eyeline in the previous shot appears to be directed at the killer in this shot. And the killer's eyeline in this shot appears to be directed at Amy in the previous shot. One eyeline match would have been enough to create a sense that the two shots share the same space.

Two eyeline matches double this sense of shared space. This sense of shared space is further supported by the 180 degree line that is created by this edit. Amy looks leftward, and the killer looks rightward. This places the two characters on the same side of an imaginary 180 degree line, creating the sense that we know where each is in relation to the other. Amy is to the killer's right. The killer is to Amy's left.

However, we then cut to the killers POV -- and see an empty tunnel!

Vacancy's editing has fooled the audience! The killer was not behind David and Amy. As if to confirm this, the killer turns in the other direction.

We cut back to Amy, still looking behind her. This confirms that she hasn't yet left the tunnel. The killer doesn't see her because he's in another part of the tunnel.

Horror films use such tricks to unnerve audiences, fraying their nerves so they are more susceptible to upcoming shocks and frights.

For more about how horror uses editing, and the difference between shocks vs. frights, see Horror Film Aesthetics: Creating the Visual Language of Fear. This blog represents a continuing discussion of my views on horror, picking up from where the book left off.

Posted by Thomas at 9:45 AM No comments: 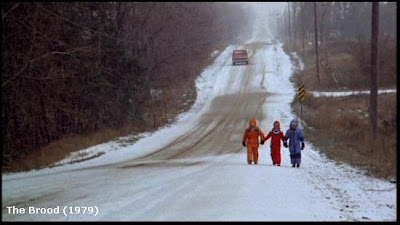 For more about my thinking on mise-en-scène in horror, see Horror Film Aesthetics: Creating the Visual Language of Fear. This blog represents a continuing discussion of my views on horror, picking up from where the book left off.
Posted by Thomas at 2:45 AM No comments: