Can One Distinguish I Spit On Your Grave from Death Wish? 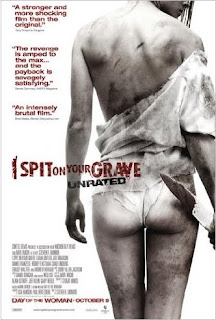 I'm tired of all the remakes of 1970s and 1980s horror films. So many remakes over the last 15 years; most of them inferior or no better than the original.

But the recent release of the new I Spit On Your Grave raises another issue. This film played this past weekend at the Screamfest L.A. horror film festival. The film is being marketed and critiqued as a horror film.

But is it horror?

How does this story (the same in both versions), differ from the story in Death Wish? 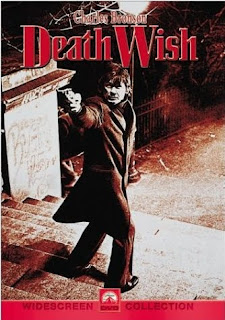 It doesn't. All three stories are fundamentally identical. A woman is brutally raped and killed. This gives the audience permission to enjoy the bloody vengeance that is then visited upon criminals and thugs. All three films are not horror, but revenge fantasies.

Yes, there are minor variations, but do any of these elements differentiate I Spit on Your Grave from Death Wish so that the one is horror, but not the other?

Another variation is that I Spit on Your Grave punishes the men who injured the woman, whereas Death Wish punishes any and all criminals (i.e., those who prey on women, and men, other than just the husband/vigilante's wife). This makes the revenge killings in I Spit on Your Grave more personal, but not more of the horror genre. 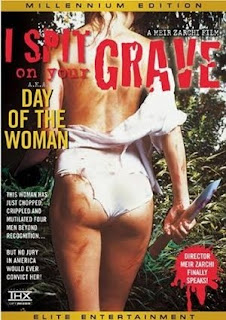 But if I Spit on Your Grave is horror because of the rapist's more graphic death, are we not being asked to identify with the rapist? Is that what makes the film horror?

No, because horror requires that we identify/sympathize with the victim, not with the monster. This is why revenge fantasies by their very nature risk undermining the horror elements.

A final variation is that I Spit on Your Grave is a low-budget, indie film, whereas Death Wish is a big studio product. This is also why the former is more graphic; indie films were more graphic than studio fare in the 1970s.

This may be the key reason to the (false) perception that I Spit on Your Grave is a horror film. Back then, horror was more likely associated with low-budget, indie trash. Because I Spit on Your Grave was a low-budget indie film, and a highly graphic one, it was more likely to be marketed by the distributor, and accepted by the audience, as a horror film.

It's a marketing thing. Another example of people's genre perception being formed by marketing rather than by objective, rationally derived, aesthetic criteria.

Horror requires an Unnatural Threat. Something "not of this world." Some dramatic element that, as H.P. Lovecraft wrote, creates "a malign and particular suspension or defeat of the fixed laws of Nature which are our only safeguard against the assaults of chaos and the daemons of unplumbed space."

An Unnatural Threat can take the form of the supernatural (e.g., The Sixth Sense, The Haunting, The Exorcist, The Mothman Prophecies, The Grudge, Lost Souls).

But an Unnatural Threat can also be an "unnatural creature" of science. That is, some creature that is unnatural to our current understanding of nature (Alien, The X-Files).

Can a slasher make for a horror film? Yes, provided that it is an unnatural slasher. Halloween was the first slasher horror film. This was because Michael Myers could not be killed. He was unnatural.

I have grudgingly carved an exception to the Unnatural Threat. I'm willing to concede that there is a second horror genre, which I call the Naturalistic Psycho Gorefest, wherein the victim is terrorized by mortal humans (e.g., Saw, The Devil's Rejects, The Texas Chainsaw Massacre). But even in these films, there must be something that removes this stories from the natural and normal. Some element...an especially bizarre or deranged psycho, or an especially unusual environment or situation.

I see nothing in I Spit on Your Grave that removes it from the realm of crime drama/suspense/revenge fantasy.

For more about my thinking on Unnatural Threats and the Naturalistic Psycho Gorefest, see Horror Film Aesthetics: Creating the Visual Language of Fear. This blog represents a continuing discussion of my views on horror, picking up from where the book left off.
Posted by Thomas at 10:25 PM No comments:

Last year I saw Koldo Serra's short (18 minutes) Spanish horror film, El tren de la bruja (aka The Spook House). It was released in 2003, had some success on the festival circuit, and years later will appear in another festival -- the 2010 Tabloid Witch Awards.

The film's resemblance to Hostel (2005) is remarkable.

A "scientist" taunts over a microphone: "Did you really think people would pay $1,500 Euros to sit in a chair for 15 minutes? Didn't you wonder why this 'experiment' takes place in an abandoned warehouse, far off in the country? No. Imagine if you are a rich person, bored with life. What new thing might entertain you? Perhaps to see some poor, frightened fool tortured and killed."

I paraphrase, but that's the gist.

I have this film on an English-subtitled DVD, but I can only find a non-subtitled clip on You Tube:

Solo insists that the scientist's taunts are only meant to frighten him, as part of the experiment. He says he refuses to be frightened. The scientist taunts some more, then ups the ante...

So, is the experiment legit? Or are we in for some actual torture and death to entertain the rich? The outcome is neither. El tren de la bruja packs more surprises in its 18 minutes than Hostel manages at feature length.

Apart from its originality, El tren de la bruja is superior to Hostel in that it doesn't rely on graphic torture. Rather, it relies primarily on sounds and suggestions to inspire fear.

Actor Manolo Solo does a great job. His character goes through cocky arrogance, feigned courage, doubt, fear, hysteria, and cynicism over the course of 18 minutes.

As in The Blair Witch Project, El tren de la bruja's sound is an active participant in the story. The noises emanating from the dark, moving about, and changing pitch and timbre, insinuate all manner of threats. Heard but not seen, these alternating noises inspire fear by conjuring images in the audience's imagination.

Copies of El tren de la bruja may be obtained through Kimuak.com.

Also see my Horror Film Aesthetics: Creating the Visual Language of Fear. This blog represents a continuing discussion of my views on horror, picking up from where the book left off.
Posted by Thomas at 12:45 AM No comments: