Setting Up Twists in Twists of Terror

Low-budget horror films often spring arbitrary surprises on viewers. The slashers' identities in House of Death (1982, aka Death Screams) and Girls Nite Out (1982), are arbitrary surprises because there was no dramatic setup; no clues pointed in their direction. Some viewers might have guessed, but only due to their familiarity with genre conventions (i.e., He was too obviously innocent, or, She couldn't be the killer so naturally she probably is).

Mysteries must play fair with readers and viewers by providing clues before revealing the killer. That's the purpose of the genre: to present a solvable puzzle. But horror's primary purpose is to scare, and a dearth of clues can make an unknown killer more frightening. If you can't guess his identity, he can be anyone.

Yet all storytelling requires some logic, even if only a kind of surreal "dream logic." (Dario Argento and David Lynch are masters of dream logic.) So while horror is more flexible on logic than some other genres, there is a breaking point. Too many arbitrary surprises, and audiences will roll their eyes, and have difficulty in suspending their disbelief. On the other hand, the more entertaining a film, the more forgiving audiences are about any flaws, including plots holes, stupid characters, and arbitrary twists.

The Canadian TV movie Twists of Terror (1997) is aptly titled. Each tale in this horror anthology has a "surprise twist." While the twists are unoriginal and sometimes excessive in number, they are mostly well set up, and the film is entertaining enough so we can forgive the strains in logic. 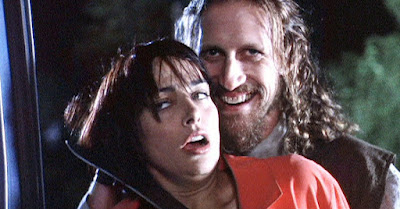 In "The People You Meet," a young couple, Joe (Carl Marotte) and Amy (Jennifer Rubin), celebrate their honeymoon over dinner. They express love for each other, though there are intimations that all was not always well. Later, they suffer a car accident at night. Rednecks kidnap them, tying up Joe in a shed. He urges Amy to escape, which she does.

After she darts out of the shed, Joe berates the rednecks. Surprise!

Turns out Joe hired the rednecks to stage the accident, and rape and kill Amy so he could collect on the insurance. Joe hates Amy. The rednecks leave the shed to hunt down, rape, and kill Amy.

They return with Amy, unharmed, who then mocks Joe. Surprise!

Turns out Amy knew that Joe hated her, as she hates him -- and she was having an affair with the very same redneck Joe hired, so she knew about Joe's plans. The redneck now kills Joe.

This is a bit much. Screenwriter John Shirley did drop some clues about problems in the marriage over dinner, so we can believe Joe plotting against Amy. But Amy's affair with the redneck feels arbitrary (a second twist for its own sake) and ridiculous. Still, because "The People You Meet" is entertaining and energetic, we can overlook the silly double twist. 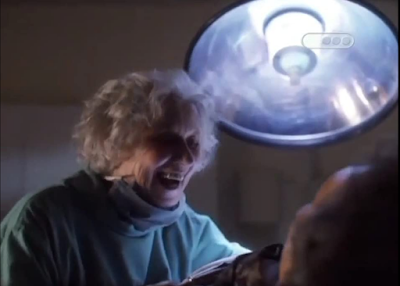 In "The Clinic," Mr. Rosetti (Nick Mancuso) is bitten by a dog at night. He stumbles upon a hospital and enters for emergency care. But the doctor, the nurse, the ambiance are strange and creepy. In the end Rosetti discovers that he's in an insane asylum -- and the lunatics have taken over. Surprise!

Again, not unexpected. Both the ambiance (similar to that in X-Ray, aka Hospital Massacre, 1981), and genre conventions, promise a dark surprise. Nor is the specific surprise all the surprising. We've seen this same "twist ending" in Asylum (1972) and Don't Look in the Basement (1973).

But the surprise was logically set up by the atmosphere created by creepily soothing doctor, the hyper-sexualized nurse, the deserted hallways and hints of gore. And the story was entertaining. 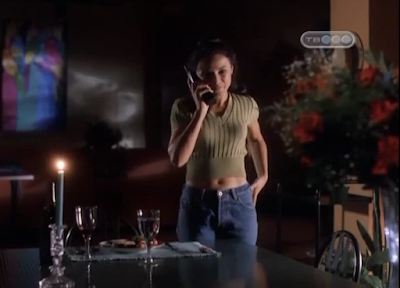 In "Stolen Moments," Cindy (Francoise Robertson) is a sexually and emotionally repressed woman seeking romance. She has difficulty connecting with men. She instead lavishes her affections on her many pets. Then she meets Barry (Andrew Jackson), a yuppie in a singles bar, and agrees to meet him at an empty house later that night. Is Cindy in danger?

She meet Barry. They have passionate sex. Cindy thinks it's love. Then Barry brings out his male buddy. Barry wants them to gang bang Cindy. Surprise!

Barry really is sleaze. As Barry is getting dressed, he hears a scream. He finds his friend's freshly killed corpse. Cindy looks terrified. Barry thinks there might be a prower. Then Cindy knocks Barry out with a hammer. Surprise!

Turns out Cindy is the killer. Has she snapped because they used her? But when she goes home, she has an entire bulletin board with tokens from her past victims. Surprise!

Turns out Cindy is a serial killer. As a newspaper headline confirms the next day.

None of this is surprising to those familiar with genre conventions, so these surprises are not arbitrary. Both Cindy and Barry emitted warning signals. Cindy was repressed, neurotic, with too many pets. A classic 1990s, neo-noir femme fatale in the body of a prude. And Barry was too smooth talking, sensitive, and handsome. A stereotypical blond yuppie sleazeball pretending to be Mr. Perfect. From the start, I knew it was 50/50 that Cindy was the villain.

Once again, an entertaining story.