Acting Errors in The Fear of Darkness

When creating a character on film, it's important for an actor to ground the character in reality. The more real the character feels to an audience, the easier for the audience to empathize with the character, and thus suspend their disbelief regarding the supernatural events the character experiences.

Little things are important. Details enhance, or subvert, the audiences' sense that the character, and events on screen, are real. A viewer might not even know why he didn't like a film, only that it didn't feel right.

In The Fear of Darkness (Australian 2015), Skye (Penelope Mitchell) insists that an extra dimensional entity killed her boyfriend. The police think that Skye killed her boyfriend; that she is insane. They've placed Skye in the care of Sarah (Maeve Dermody), a psychologist who's trying to heal Skye.

The Fear of Darkness is reasonably enjoyable, albeit mediocre and unoriginal. But one thing especially irritated me. Sarah kept removing her eyeglasses. Anyone who's experienced near-sightedness, and thought about it, knows that Sarah's behavior rang false. And once I thought about it, I couldn't stop thinking about it. Every time Sarah removed her glasses reminded me that it was only a movie.

Why does Sarah wear glasses? Presumably because director Christopher Fitchett wants us to think that Sarah is smart. She's a doctor. A scientist. Why, she's so smart, she even wears glasses!

That's an old trope. Put glasses on a young, pretty actress, so we all think she's smart. But okay. So Sarah wears glasses. But she is too young to be far-sighted. So she must be near-sighted. In which case, actress Dermody should behave as would a near-sighted person.

Far-sighted people use reading glasses to magnify materials that are up close, like words in a book or on a computer screen. They remove their glasses to look at a person across a room, because even slightly longer distances appear sharper without reading glasses.

But near-sighted people wear glasses all day. They put them on in the morning, and keep them on until bedtime. To a near-sighted person, everything, near or far, is shaper with glasses.

Yet Sarah treats her glasses as would a (much older) far-sighted person. She's always putting them on and taking them off. Here are two examples, among many: 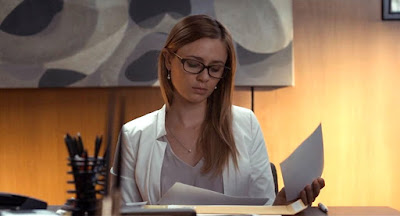 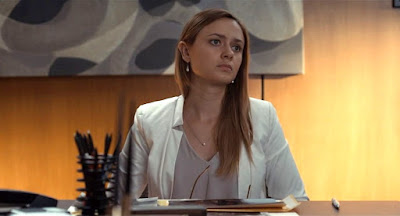 Sarah wears glasses to read some papers. But then she removes them to look at people across a conference table. This is how a (much older) far-sighted person uses reading glasses. But near-sighted people need glasses for both reading and seeing people across a room.

Now this scene is doubly fake ... 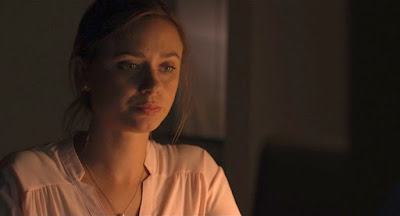 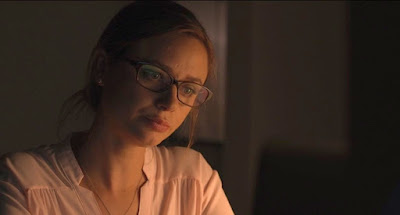 Then something interesting appears on screen. Sarah puts on her glasses. Why? To get a closer look? Nonsense! If she could see the screen well enough to use a search engine, she does not need glasses for "a closer look." 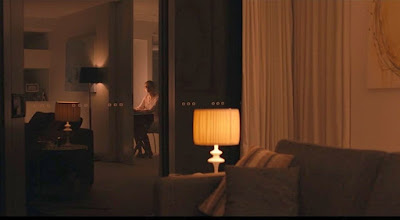 So Sarah gets up -- and removes her glasses! -- as she approaches the mirror. Why? To get a better look? From far across the room? Again, nonsense. She saw the entity with her glasses. Why take them off now? Being near-sighted, the room would go blurry once Sarah removes her glasses. 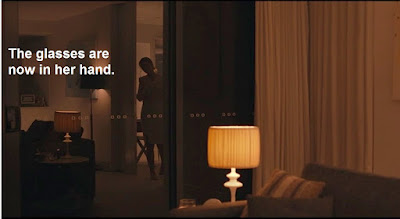 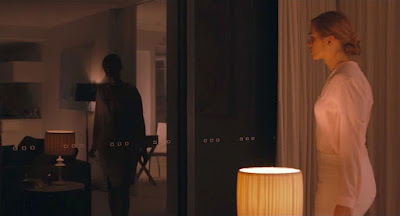 Because they're far-sighted, which the young Sarah cannot be.

But if she can't play with her glasses, that leaves Sarah with only two realistic options. Either lose the glasses -- But then how will we know that Sarah is smart? Or keep her glasses on throughout the film, never removing them -- But then we won't see Dermody's pretty face!

Either option would work. But because horror films are entertainment, and attractive actors are a selling point, The Fear of Darkness reduces eyeglasses to a "smart girl" prop (i.e., an optional accessory) on a pretty face, at the expense of creating a more realistic character.

For more about the performances of actors in horror, see Horror Film Aesthetics: Creating the Visual Language of Fear. This blog represents a continuing discussion of my views on horror, picking up from where the book left off.