Psychic Sue: Pragmatic Aesthetics in the Use of Location and Set Décor

One of the biggest expenses for many low-budget films is renting an appropriate location. Actors and crew will often work for deferred pay, or even no pay, and there are plenty of both to choose from. But appropriate locations -- especially on the cheap -- are harder to secure.

Money can be saved on location rentals (and their permit fees and insurance coverage) by reusing the same location for different locales (i.e., pretending that the same place is really someplace different). Even cheaper and easier if you can reuse the same location without changing any of its set décor.

(By location, I mean where a scene is filmed. By locale, I mean the place the location represents. For instance, a scene that is filmed in Toronto (the location) might represent an event occurring New York City (the locale.)) 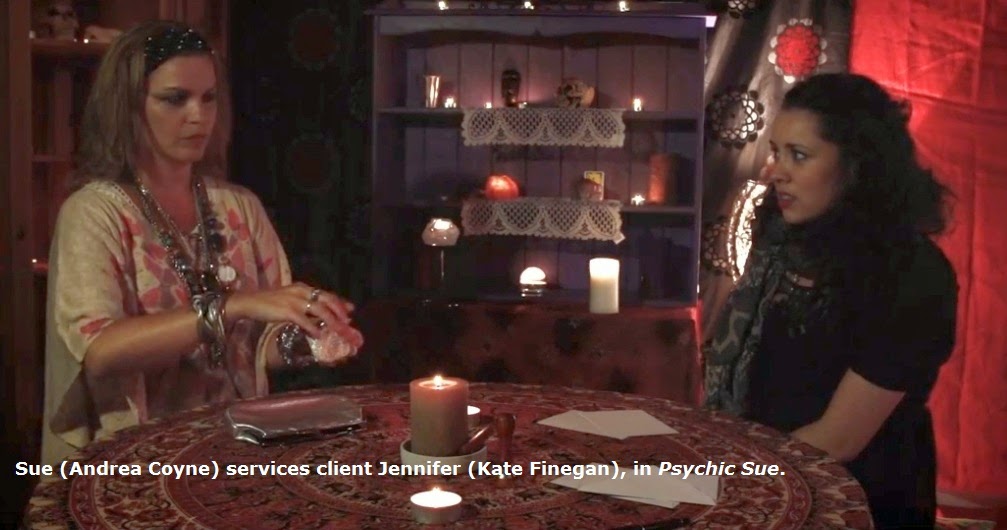 In the short, comedic horror film, Psychic Sue, Jennifer (Kate Finegan) visits Sue (Andrea Coyne) for a reading. Sue's psychic shop is stereotypical of such places -- red curtains, candles, occult knick-knacks. Sue spouts the usual spiritual gobbledygook. Rather than demanding anything so crass as money, Sue instead asks Jennifer to "cross my palm with silver." She also claims that her candles are "forged by the monks of Tibet."

Later, a ghost compels Sue to visit "a real psychic." So Sue visits psychic Zoe (Sarah Agha), whose shop is nearly identical to Sue's. Identical red curtains, candles, lights, occult knick-knacks. Only the tablecloth and its place setting are different.

Obviously, director Dave Lojek used the same room and set décor. He didn't even bother to vary the curtains and knick-knacks. Yet events make it clear that this location represents two different locales -- Sue's shop and Zoe's shop.

This dual use of the same location and set décor serves two purposes. Pragmatically, it saves money. Aesthetically, it provides humor. Monty Python often used the same sets (with only cursory changes in décor) for comedic effect, the characters pretending not to notice.

Well, sometimes one character -- usually the put-upon protagonist -- does a quick glance-about, noticing the striking similarities, before shrugging it off. Sue does likewise in Zoe's shop.

Psychic Sue's script reinforces the comedic effect of using identical rooms for different shops. For instance, Zoe spouts nearly identical nonsense to that of Sue. Zoe asks Sue to "cross my palm with silver" and extolls her candles as being "forged by the monks of Tibet."

By using the same location and décor for different locales, Lojek saved money. But what makes his reuse of locations especially admirable is that he put his financial corner-cutting to aesthetic use (e.g., heightening the humor).

Psychic Sue's duel use of the same location is an example of what I call pragmatic aesthetics -- when a filmmakers puts a budgetary compromise to aesthetic use.

For more information about mise-en-scène and pragmatic aesthetics in horror films -- see Horror Film Aesthetics: Creating the Visual Language of Fear. This blog represents a continuing discussion of my views on horror, picking up from where the book left off.