Long Shots and Staging in The Woman in Black

It has been said that "Comedy is a long shot, tragedy a closeup." The idea is that closeup shots allow an audience to more easily empathize with a character. When we see a character's agonized face, with agonize with them. Conversely, long shots emotionally distance us from a character, so that when they suffer, when they slip and fall, we laugh at them rather than with them.

But there is no firm rule for a shot's emotional impact. Much depends on how the shot is used in the context of the film; its story, characters, genre, themes, style, etc.

The Woman in Black (1989) is an old-fashioned, English ghost story set in a rural town in 1925. The ghost herself (played by Pauline Moran) is usually seen from a distance, in extreme long shots. Writing for The Guardian (August 7, 2020) Andrew Male reports:

By the conventions of the modern horror film, the woman in black is seen rarely and – with one big exception – from a distance. “I deliberately didn’t show her close up,” the late Wise told journalist Tony Earnshaw in 2015, “because then the audience can construct a face which is horrible to you, your personal horror.”

Herbert Wise is citing the old horror rule that what the audience can imagine is scarier than anything a writer can describe or a filmmaker show. But as with the previous rule, I don't think it's always true. However, this rule worked very well for Robert Wise (no relation to Herbert Wise) in The Haunting.

Actually, contrary to Male's claim of "one big exception," the ghost in The Woman in Black is twice seen in closeups.

The first time, a half hour into the film, Arthur Kidd (Adrian Rawlins) is wandering about a deserted family cemetery. He stops when he senses something behind him. He jolts aside and sees the ghost in the distance. We thereupon see the ghost framed in extreme long shot, then medium shot, then closeup, then (as she walks toward Kidd) in extreme closeup. 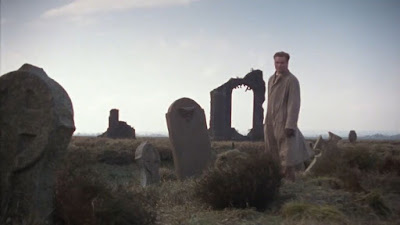 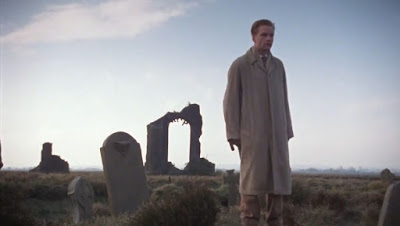 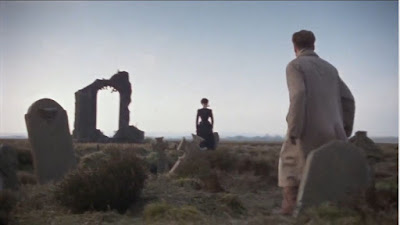 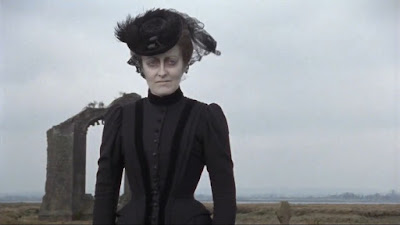 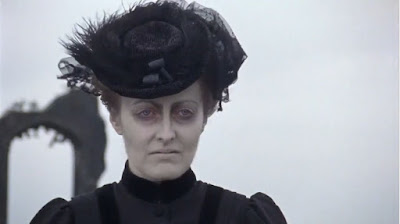 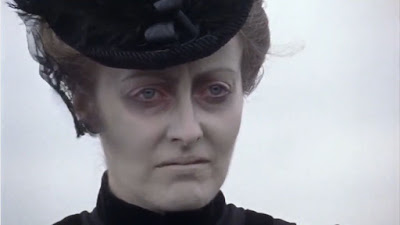 Apart from the shot framing, this scene is also admirable for its staging. As Kidd wanders about, he is surrounded by a barren landscape. It's obvious that he is alone. He pauses, as if he suddenly senses a presence, then rubs the back of his neck. He jolts around. The ghost is suddenly there behind him.

Most likely, actress Pauline Moran was lying on the ground, then rose while Kidd stood still, the shot staged in such a manner that Rawlins was blocking her, so that Moran seemed to have appeared from nowhere. A clever example of how low budget filmmakers can use staging to manifest a ghost, if they are unable to afford visual effects. 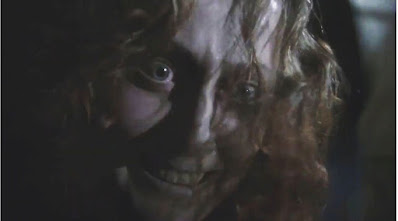 The second closeup of the ghost, some 76 minutes into the film, is likely the one that Male refers to as the "big exception." It makes for quite a scare. See the film.

For more information on framing and staging in horror films, see Horror Film Aesthetics: Creating the Visual Language of Fear. This blog represents a continuing discussion of my views on horror, picking up from where the book left off.
Posted by Thomas at 10:59 PM