The greatest strength and pleasure of TV's Dark Shadows (1966-71) were its characters. I doubt this Gothic soap opera was ever scary to an adult (though "the hand of Count Petofi" scared me as a child). The show is famous for its bloopers. Wobbly tombstones and boom mics in the frame. This is why some modern critics claim that the show's primary appeal is as camp comedy.

While the original Dark Shadows isn't particularly scary, especially in a modern horror context, I wouldn't call it camp. The show remains entertaining and engaging -- at times, even suspenseful, eerie, and poignant -- because of its characters.

Characters are created by the actor plus the script. Characters are what engage an audience. This is especially true of a TV series. Audiences tune in, sometimes for years on end, because they've come to love the characters. The plot is secondary.

Many TV remakes fail creatively, even if the new script is true to the original character, because the lead actor is different. Patrick McGoohan is The Prisoner. Darren McGavin is Kolchak, The Night Stalker. Lindsay Wagner is The Bionic Woman. The remakes failed, and good riddance.

The 1991 Dark Shadows TV remake failed for many reasons. 1. The original was shot on a TV soundstage, which is more surreal and cozy then the remake's outdoor locations. 2. The original's daily half-hour installments maintained a long, drawn-out, suspenseful pace, which the remake's weekly one-hour installments couldn't duplicate. The former pacing worked better for the series' many characters and complex, interweaving storylines.

But the remake's biggest flaw was that it changed the characters. Not only did it cast new actors (unavoidable, but a still serious shortcoming), but the script subverted the characters. The original Maggie was a wholesome girl-next-door. The new Maggie was a slut. The original Roger was a prissy, stuffed shirt. The new Roger was a hunky beefcake.

With its new set of characters (both as written and as performed), the 1991 Dark Shadows was not a remake, but an entirely new show. Yes, it poached the original characters' names, and some plot points, but that made for a remake in name only.

Sometimes classic characters are reimagined (e.g., Sherlock Holmes, James Bond, Ebeneezer Scrooge). But you can only reimagine a character so far, before it becomes an entirely new character.

Tim Burton's 2012 Dark Shadows film is not a remake, but a parody of the original TV series. Parodies are a tricky thing. Parody characters are shallow duplicates; neither the original characters, nor substantive characters in their own right. They are caricatures to laugh at, rather than the original people the fans care about.

Perhaps Burton understood that Dark Shadows could not be remade on any serious level. Not only is the original cast unavailable, but the original characters were written with a white bread innocence (WASPy wholesome girls and respectful young gentlemen, albeit amid vampires and witches), that would be laughed at by many of today's young viewers.


Dark Shadows's original characters are the stuff of nostalgia for a simpler place and time: the fictitious town of Collinsport. The show ran during turbulent times (1966-71), with nary a mention of Vietnam, race riots, or bra-burning. Despite its horror content, the series emotionally cocooned audiences from "relevant" topics. A cocooning aesthetically supported by the show being shot on soundstages, which, as I noted above, are more cozy and surreal than are (more realistic) outdoor locations.

Fans seeking a remake will be disappointed -- and I suspect that few fans will be satisfied with a mere parody.

For more about actors in horror, and about the relationship between horror and comedy, see Horror Film Aesthetics: Creating the Visual Language of Fear. This blog represents a continuing discussion of my views on horror, picking up from where the book left off.
Posted by Thomas at 3:35 AM No comments:

The Broken: A Character's Facial Shift as Horror

This revelation of someone being other than they appear to be can be done through special effects, but I am especially impressed when it's conveyed through story and acting alone (e.g., a shift in facial expression).

In The Broken (2008), Gina (Lena Heady) suffers a car crash. Physically okay, she is now plagued with amnesia -- and a growing suspicion that she has a double (i.e., a doppelganger, though that term is not used) who is somewhere out there, following her. Why?

Gina then grows suspicious that her boyfriend, Stefan (Melvil Poupaud), is not her boyfriend. That he's been replaced by his doppleganger.

If it sounds like Invasion of the Body Snatchers, that's no accident. The Broken pays direct homage to the 1978 remake when a frightened Asian man tells Gina's brother, Daniel (Asier Newman), "That's not my wife."

The Broken's conceit is supported by a creepy atmosphere that's achieved through 1. long stretches of silence (occasionally supported by some unsettling ambient noise), and 2. extreme closeups of mundane objects.

(David Lynch has used these same techniques to great effect, and The Broken continues borrowing from Lynch through to its penultimate scene, with a musical score that's reminiscent of the one at the end of Mulholland Drive.)

The First Punch is in the penultimate scene, in the form of a Big Revelation. Gina's long hunt for her doppelganger ends when she discovers her own dead body in her apartment, whereupon Gina's amnesia lifts and she remembers that She is the doppelganger!

Naturally, she is distraught by this revelation, in an emotional scene that is supported by The Broken's Lynchian music score.

I saw this revelation coming about 15 minutes before it did. It's not too original a plot twist. Many films have protagonists who discover at the end that they're really the villain (Total Recall, Thr3e, Number 23), or really the good guy (Murder by Night), or a ghost (The Sixth Sense, The Others) or dead (Jacob's Ladder). Ideally, the audience is likewise surprised. Having empathized with the protagonist, they emotionally share the protagonist's shock and distraught.

But it's The Broken's final scene that makes it a truly great horror film. Its Second Punch is a Personality Shift that is one of the scariest horror scenes of the past decade. It's a scare that's achieved without special effects, but through story and acting alone.

In this final scene, Gina is at work, knowing that she is a doppleganger. She exits the room to see her brother, Daniel, in the hallway. She'd earlier warned Daniel about the doppelgangers. Daniel has by now seen the personality transformation in his fiancée.

We'd last seen Gina as a sympathetic character. A woman distraught at learning that, before her amnesia, she had been a murderous doppelganger. 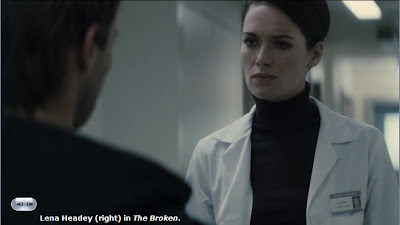 She approaches Daniel, a blank look on her face. Is she still the sympathetic doppelganger with a conscience? We can't tell from her expression. 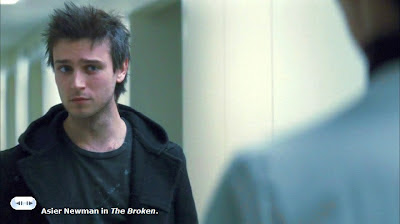 Daniel stares at her. Saying nothing. Wondering if she's now also one of them. (She always was, though she -- and he -- didn't know it.) 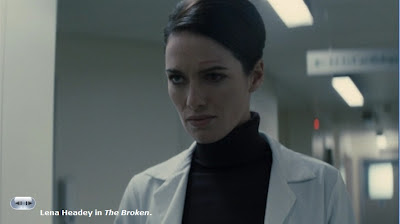 An expression of hate clouds Gina's face. The same cold hate we'd seen on the other doppelgangers. The camera moves in closer to emphasize Gina's expression. She remains silent. No warm words of greeting to her brother.

Whereupon Daniel runs away in fear.

This is the Second Punch. It's the scariest scene in the film because we have grown to empathize with Gina. She had been warm and loving. The First Punch was shocking, but it didn't mean we couldn't continue sympathizing with her as a doppelganger. Bruce Willis remained sympathetic in The Sixth Sense, though he turned out to be a ghost. Arnold Schwarzenegger remained a hero in Total Recall, though he learned that he had been an evil government agent before his memories were removed.

Gina's emotional acceptance of her villainy is the real terror of The Broken. Not the initial terror of her being stalked by doppelgangers. Not the second terror of discovering that she's one of them. But the final/third terror of her embracing her dark side -- of her personality transforming into entirely new person.

Some monsters resist their dark side. Gina didn't. She became evil before our eyes. A transformation achieved largely through Headey's performance.

Daniel's discovery of Gina's personality shift evokes Invasion of the Body Snatchers's scene where Nancy discovers that Matthew has become a pod person. In both films, a frightened mortal approaches a trusted friend, only to have that friend's face reveal that they are no longer the same. But Donald Sutherland's monster -- although suggested by his performance -- also benefited from the sound effects emanating from his mouth. Not so with Lena Heady.

Lost Souls has a character shift that's similar to Gina's -- a scary transformation implied largely through acting. At the film's end, Peter (Ben Chaplin) is about to transform into the Antichrist at a specific time. (The date and time of his birth, 33 years ago.) He urges Maya (Winona Ryder) to shoot him after the transformation.

Shifts in facial expression, especially when a trusted person is suddenly revealed to be evil, are an effective way of scaring audiences. Many examples exist. To cite just one more, consider Ray Wise's changes of facial expression to suggest Bob's possession of Leland in Twin Peaks.

For more about acting techniques in horror films, see Horror Film Aesthetics: Creating the Visual Language of Fear. This blog represents a continuing discussion of my views on horror, picking up from where the book left off.
Posted by Thomas at 11:23 AM No comments: