As I've discussed in recent posts, bad writers often have characters spout clichés and catchphrases that are inconsistent with their previous statements or behavior, because it's an easy way to fill up pages with dialog. Even good writers fall into this trap, because clichés and catchphrases come naturally to people. But good writers should delete these in subsequent rewrites.

In Death's Door (2015), a group of young people trespass into a deceased magician's house for a night of partying. Naturally, the house traps them inside. Ghostly manifestations and grisly deaths ensue. The survivors search for clues as to what's happening, and how they might escape. 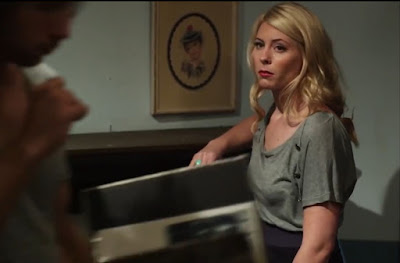 While some young folk search through boxes, perusing old scrapbooks of newspaper clippings, Suzanne (Danielle Lilley) says, "Maybe we shouldn't be doing this. This is all private stuff."

Suzanne trespassed into this house along with everyone else. The film had no scenes showing any hesitation on her part. Indeed, when we first meet Suzanne, it is she who is pressuring her more timid friend into coming along.

Thus it's out of character for Suzanne to now feel scruples about invading anyone's privacy. Nor do any previous scenes provide motivation for her to have "matured" morally. Indeed, the recent hauntings and killings in the house provide additional motivation in the opposite direction -- for Suzanne to search the boxes for clues to escape the house.

So why did Kennedy Goldsby write this line of dialog? Filler. Thoughtless filler. Goldsby has several of his nondescript characters in the bedroom, and he likely felt a need to give them each something to say. So he had Suzanne say, "Maybe we shouldn't be doing this. This is all private stuff."

After all, it's what some people would say if they saw someone looking through someone else's private belongings.

Except that Suzanne is no longer just anyone. She has an inner life -- personality, emotions, habits, morals, motivations -- as established by the previous scenes. But Goldsby has forgotten his previous scenes. He seems to have focused solely on whatever scene he's currently writing. And he failed to notice Suzanne's inconsistency in subsequent rewrites.

Death's Door is a treasury of bad dialog: fillers, clichés, catchphrases, and inconsistencies. The characters are nondescript and interchangeable, lacking unique voices. Much of their dialog can be randomly redistributed among them, without changing the story. They shout and argue for no purpose other than to fill up time and try to create "suspense." But as their arguments lack proper motivation, their constant bickering is annoying rather than suspenseful or revealing.

Death's Door does have good make-up effects. It's an enjoyable film if you're in the right frame of mind; if you just want to see a random group of young people killed in gory fashion, and can do without a clever story or engaging characters.

For more examples of poorly motivated characters and inconsistent dialog, see my posts on The Dark, Lake Fear 3, Dark Floors, In Search of Lovecraft, Prometheus, and The Haunting of Marsten Manor.