Acting guru Konstantin Stanislavski taught that characters have inner lives that motivate their behavior at every point in a story. A character's actions should be consistent with his desires, goals, personality, and changing situation throughout a novel, play, or film. It's how an actor should approach a role. It's how a writer should write a character.

Some reasons for poorly motivated characters:

1. Writers treat characters like puppets on a string, serving the interests of the plot, even when the character's actions contradict their previously established inner lives.

2. Writers fill a character's mouth with clichés and catchphrases, because the writer is too lazy, thoughtless, or untalented to construct sharp yet believable lines.

This is the puppet on a string, devoid of an inner life. Audiences, sensing that something is off about the character, that the character is ridiculous, have difficulty suspending their disbelief and empathizing with the character. Instead, they simply laugh when the puppet is killed onscreen. 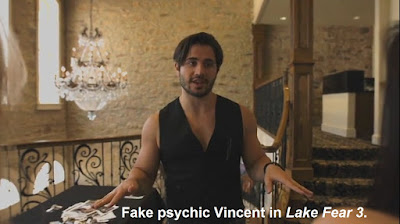 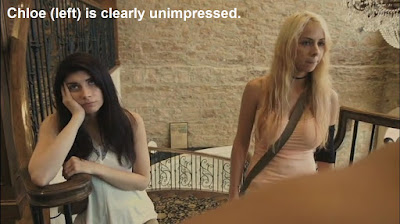 In Lake Fear 3 (a bad film on many levels), Revel (Shanon Snedden) is seeking her missing sister. Her friend Chloe (KateLynn E. Newberry) thinks it's a lost cause. So she hires TV psychic Vincent (Devi Khajishvili) to put Revel's mind to rest about her sister.

Chloe's request is itself an astonishingly poor piece of writing. She instructs the psychic, "She (Revel) needs closure. Just make something up for all I care. She needs this."

Really? Just make something up? So Vincent can claim that Revel's sister is alive in Toronto, married to a millionaire, or that she was tortured to death in Chicago -- doesn't matter.

But writer Gerald Crum is determined to make his bad script worse. Sitting down with Revel and Chloe, Vincent asks about the sister, "So, ah, how did she go missing?"

Meaning, Vincent is supposed to be psychic. He should know how the sister went missing.

But wait a minute. Chloe knows Vincent is a fraud. She hired Vincent to lie to Revel. Chloe's motivation is to give Revel closure. So why is Chloe undermining Revel's faith in Vincent's psychic abilities? Chloe paid good money for Vincent to lie, and now Chloe is sabotaging his ability to lie.

My guess is that writer Crum was focused on the scene, in making Chloe sexily snarky, and forgot about the previous scene. He was treating Chloe like a puppet, having her serve the current scene (here is where you "decide" to be sexily snarky), and he forget about Chloe's inner life and motivations as established in previous scenes.

Also, Crum might have thought that Chloe's putdown of Vincent's psychic abilities was a funny bit of dialog. Crum's focus was on the scene and the line, not on Chloe's character -- her inner life and motivations.

Lake Fear 3 is full of bad dialog, poor characterization, and awful acting. (The makeup effects are good.) An especially egregious example of bad dialog occurs after demons attack the trio and Revel is killed. Chloe and Vincent find themselves with Remington (Joshua Winch), who knows about demons. Crum thinks this is good time for his characters to engage in an argument.

Bad writers often have characters engage in poorly motivated arguments, because they think it's a good way to create tension, suspense, and drama. And during this pointless argument ...

Chloe snaps at Vincent, "Like you're one to talk. You're just a fraud."

Vincent replies, "Oh my God. That's called being an actor."

Chloe says, "Okay, yeah. Well, if you would have told me and my friend that you were just an actor, we'd be hundreds of miles away by now. But no. You needed your fifty dollars."

Huh? Chloe knew Vincent was a fraud. She hired him to "Just make something up." She even admits to paying him $50. So why is she in the same breath saying "if you would have told me and friend you were just actor, we'd be hundreds of miles away by now."

Apparently, writer Crum isn't paying attention to anything he'd previously wrote. His focus is always on his current scene, ignoring whatever came before. And he's filling up every scene with whatever lines sound snarky, cool, funny, or dramatic -- to hell with the context of the story, or consistency of character.

Viewers who are still paying attention at this point are rolling their eyes.

For more examples of poorly motivated characters, see my posts on Dark Floors, In Search of Lovecraft, Prometheus, and The Haunting of Marsten Manor.