The classic horror psycho is what I call an uberpsycho. A dark, enigmatic, force of nature. Indestructible and relentless, he feels no pain, no empathy, no sympathy. He doesn't run, but plods forward, calmly confident in his ability to catch his victims, and fearing no pursuer.

Psycho (1960) is an excellent and frightening film, but Norman Bates is a suspense psycho. He is mortal and vulnerable. He is a natural threat, and thus elicits from audiences a different quality of fear than a unnatural threat.

An uberpsycho is an unnatural threat. Myers and Jason are indestructible and superhuman, for no good reason. Our sense of their indestructibility is supported by their enigmatic nature. Try to explain their strength, and they become less mysterious. Hence, they become less believable -- and less powerful, less threatening.

To create this enigmatic aura around a horror psycho, it's helpful to keep them hidden either offscreen or behind a mask. A psycho risks being disempowered (i.e., feel less threatening) when we see his face.

Final Exam and He Knows You're Alone both feature silent, nearly mute psychos, killing for no apparent reason. Yes, they're skillful with a knife. Final Exam's killer even has the required superhuman strength. 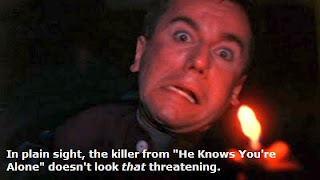 Yet because we see their faces early on, they're brought down to our human level. They are less impressive. Not enigmatic, dark forces of nature, but merely crazy humans on a killing spree. These films edge away from horror, toward the suspense/crime thriller genres. 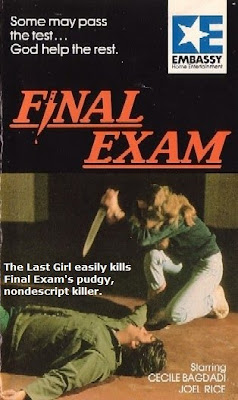 Alfred Hitchcock famously said that a strong villain makes for a strong film. Alas, the psychos in Final Exam and He Knows You're Alone are nondescript rather than enigmatic.

Even worse is when a film focuses on a mundane psycho (rather than on the victims), showing us his pathetic life in detail (e.g., Maniac, Don't Go in the House). In such films, the psycho appears weak, vulnerable, and natural. We feel disgust and pity, rather than awe and fear.

To shoot an effective horror slasher film (rather then a suspense or crime thriller), it helps to hide your psycho offscreen or behind a mask.

Apart from uberpsychos (an unnatural threat), there is another sort of horror psycho found in naturalistic psycho gorefests. These psychos are mortal (i.e., naturalistic), but they're also colorfully crazy and fearless (e.g., Texas Chainsaw Massacre, House of a 1000 Corpses), rather than pathetic or nondescript.

But they're another issue, not to be found on the "slasher spectrum," which runs from the enigmatic (Halloween) to the nondescript (Final Exam) to the pathetic (Don't Go in the House).

For more about Unnatural Threats, Uberpsychos, Apparent Uberpsychos, and Naturalistic Psycho Gorefests, see Horror Film Aesthetics: Creating the Visual Language of Fear. This blog represents a continuing discussion of my views on horror, picking up from where the book left off.
Posted by Thomas at 1:04 AM