Genres are often confused with their icons. A genre is a set of story conventions. Icons are dramatic elements -- character archetypes, objects, settings, historical periods, etc. -- that recur throughout a particular genre, so that they become associated with that genre.

The vampire is a horror icon, though other genres also use vampires. Love at First Bite and The Munsters have vampires, but are comedies. The spaceship is a science fiction icon -- but Alien is a horror film.

Icons are a form of shorthand symbolism. Being symbols, it's easy for an icon to disengage from their "parental genre" and take on lives of their own. To convey meanings, and have a purpose, apart from their parental genre's goals.

The horror genre's goal is to inspire fear, usually through an Unnatural Threat (less often via a Naturalistic Psycho Gorefest). However, rather than frighten, some horror icons disengage from the horror genre and instead comfort, or sexually excite, or offer a sense of empowerment to the viewer.

Consider the blood-soaked Killer Scream Queen (as opposed to Scream Queens that are victims). Although this horror icon has perhaps been a threat in some films, today she is primarily a pinup girl. Audiences are not meant to fear her, but to identify/sympathize with her, and enjoy her massacres of (often male) victims. 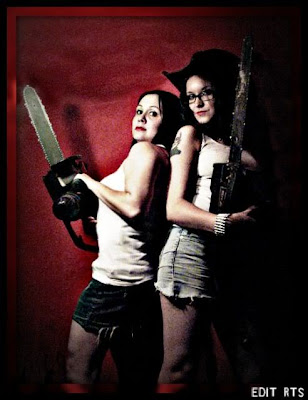 Also consider this work of art, The Girl, The Chainsaw, from Million Gossip: 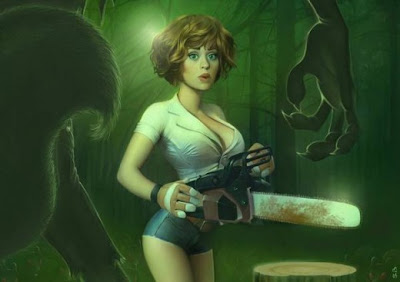 The Killer Scream Queen pinup girl has even become a whimsical Halloween costume. Ladies can purchase this Chainsaw Babe outfit from Sexy Costumes: 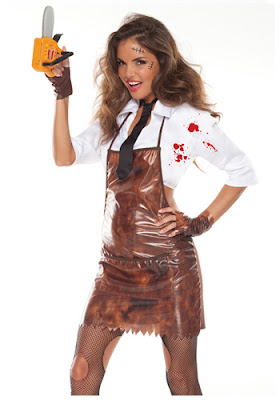 The Killer Scream Queen is a horror icon that's found a life outside of the genre. No longer threatening or scary, she is used primarily to...

Some critics have accused 1980s slasher films of misogyny. Not entirely fair -- in the 1980s, slashers and victims came in both sexes. But female victims were more often, and more fully, exposed in all their nudity, so the accusation has a kernel of truth.

But the Killer Scream Queen is unabashedly reverse-sexist. She conveys an attitude of: "Now it's our turn to have fun with a chainsaw!"

Chainsaws (as opposed to knives or machetes -- which are smaller and lacking in power) are the Killer Scream Queen's weapon of choice. A Freudian (of which, I am not one) might suggest that these women are arming and empowering themselves with an especially big phallus.

There's an implication that, because these killers are women, it's liberated and progressive to enjoy their violence. One is not supposed to feel threatened by them, so much as to side with them. That's also true to some extent of ugly male killers (who have their fans), but even more so of attractive female killers.

At the 2010 Viscera Film Festival, co-founder Heidi Martinuzzi said that "Feminism is simply equality." Not all feminists agree with that definition -- or even agree about what "equality" might look like. Rosanne Barr has expressed disdain for Angelina Jolie's depiction of "strong women," because all Jolie has proven (according to Barr) is that women can kill in large numbers too. Barr describes Jolie's films "violent" and "psychopathic."

Are female killing machines (such as Lara Croft -- and the Killer Scream Queen) "strong and equal" to men -- or have they merely surrendered their femininity for masculinity? By emulating male killers, have they proven the equality of women, or the superiority of patriarchal values?

2. Serve as the object of men's sexual fantasies.

Although she is a horror icon, her rigid conformity to dominant beauty norms weakens the Killer Scream Queen's claim of also being a feminist icon.

Why are men attracted to murderous women? Perhaps for the same reason that women are attracted to murderous men. They imagine the killer will make an exception in their case, recognizing the force of "true love." The Killer Scream Queen will massacre the jocks who've bullied the nerd -- and then she will fall in love with the nerd.

Hollywood Chainsaw Hookers offers an example of the Killer Scream Queen as sex object (in a film, as opposed to her many pinup images):

The Killer Scream Queen offers an "in your face" assault upon "respectable society" that is always appealing to teenagers and marginalized subcultures. People who feel weak, ignored, or devalued sometimes feel empowered by identifying with horror icons. These icons are not perceived as threats, but as friends, compatriots, or avengers of bullies. Like some other horror icons, the Killer Scream Queen is popular because parents disapprove.

Consider this Twisted Sister video. Dee Snider, in typically freakish Heavy Metal icon makeup, appears on a poster. The father's disapproval upon seeing this poster elicits a smile from the son. (The father snarls, "Wipe that smile off your face.") Presumably, the son wouldn't enjoy Twisted Sister's music as much if the father were a fan.

Horror icons are losing their shock value. This is because...

A. Horror is big business. One can't offend Corporate America by buying its product.

B. Halloween has become an adult holiday. It used to be only for children, but Boomers largely refused to give it up upon attaining adulthood. Today parents are more likely, than in the 1950s, to share their children's interest in horror.

C. Anything will lose its shock value over time.

In Horror Film Aesthetics, I enumerate Four Appeals of horror: 1. Catharsis, 2. Metaphysical Transcendence, 3. Sympathy for the Other, and 4. Ideological Palette

The Killer Scream Queen's appeal is primarily a case of Sympathy for the Other. Her fans see her as an attractive symbol of empowerment. They don't so much fear her, as wish they were her, or were dating her. She is a horror icon with little horror bite -- a figure of comical fun and sexual excitement.

Horror requires threatening threats, and vulnerable victims, otherwise there's little to fear. The more we have Sympathy for the Other -- the more we empathize with the killer as opposed to the victim -- the weaker the horror.

To lesser degrees, the Killer Scream Queen sometimes functions in an Ideological Palette (as a symbol for some political message or other), or Catharsis (when she is threatening sympathetic characters -- which is not too often).

For more about the appeals of horror see Horror Film Aesthetics: Creating the Visual Language of Fear. This blog represents a continuing discussion of my views on horror, picking up from where the book left off.
Posted by Thomas at 11:15 PM