The 1970s was a golden age of televised supernatural horror. Back then, broadcast TV forbid graphic violence, even more so than today. This forced horror TV shows to create fear and suspense solely by non-gory means, such as story, music, and acting.

TV's Ghost Story (retitled Circle of Fear in mid-season) ran from 1972-73, and was canceled after only one season. Last seen on TV during a late-night rerun on CBS in the 1980s, little remembered, and unreleased on DVD [until recently], it's a gem of 1970s supernatural horror. An anthology series, with a different story and cast every week.

Its "Legion of Demons" episode demonstrates how the staging of actors can instill fear and paranoia in viewers.

Beth is an office typist. One day she's transferred to another division. Her co-workers are all friendly. Too friendly. Not scary, but slightly creepy. 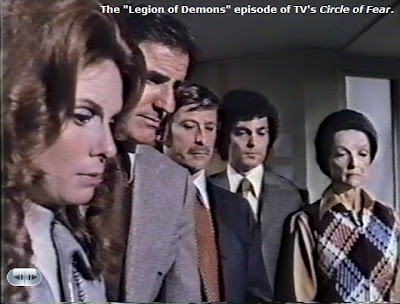 After typing for a few hours, Beth opens her desk drawer -- and sees a disembodied hand! She faints. Her co-workers crowd behind her. They see nothing in the desk drawer. Yet we immediately realize there's something ominous about these co-workers.

The main reason for our suspicion is the staging. Crowded into a single frame, these co-workers form a tight and ominous group.

Grouped people can be menacing. Seeing a group standing or staring in opposition to the protagonist probably taps into a primal human instinct. The individual vs. The Tribe.

People gathered into a group are often cause for concern in a crime drama, as when a gang crowds about the protagonist. But horror often stages otherwise friendly people into a group (such as the co-workers in “Legion of Demons”) to instill fear and paranoia. Viewers feel paranoid, sensing that something is “not right” about those grouped people, though viewers can't logically justify their paranoia.

Horror films about alien invasions, or small town conspiracies, often stage the evil characters into a tight group that stands silently facing, or staring at, the protagonists. It makes viewers (who identify with the protagonist) feel like an Outsider facing a hostile, primitive Tribe.

This frame of Beth's co-workers grouped together, observing her after she has fainted, instills fear and paranoia because of the staging, but this fear is aesthetically supported by...

* The co-workers not panicking, or even reacting, to Beth's fainting. They just stare.

* A slightly wide-angle lens. This lens not only has the aesthetic effect of suggesting that these co-workers are cause for fear, but it has the pragmatic effect of allowing the director to squeeze all five people into one frame. 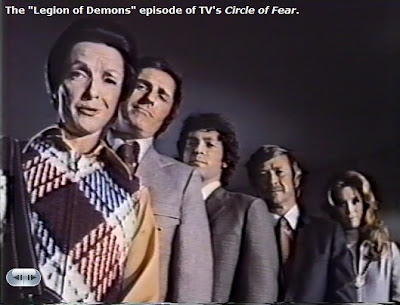 Later, when Beth awakes, she sees her co-workers standing over her. Unlike previously, it's a POV shot, yet once again this scene uses the same staging, calm demeanors, slight wide-angle lens, and ominous music.

The friendly co-workers explain to Beth that she fainted, and offer soothing words of comfort.

Of course, the staging, calm demeanors, lens, and music all imply that our paranoia, and fear for Beth, are justified.

For more about pragmatic aesthetics -- and the use of actors, lens, and music in horror films -- see Horror Film Aesthetics: Creating the Visual Language of Fear. This blog represents a continuing discussion of my views on horror, picking up from where the book left off.