I've long been an advocate for Crucible of Terror (1971), an oddball, indie British horror film. To learn why, read my review.

For many years, incomplete VHS copies of Crucible of Terror were released in so many editions, I wondered if the film had fallen into the public domain. These VHS editions were badly chopped up, missing scenes, and the washed-out visuals looked to be shot on super-8. (Curiously, the poor visuals aesthetically supported the film's story and characters.)

Then Image Entertainment released a "restored" DVD edition, running at 90 minutes, 26 seconds. A marked improvement. The visuals were sharper, colors more distinct, and about 10 minutes of missing footage had been restored. Alas, Image Entertainment's DVD was fullscreen.

Now Severin has released a widescreen edition of Crucible of Terror, running at 90 minutes, 13 seconds. That's 13 fewer seconds than Image, but perhaps Image's extra 13 seconds are not of the actual film?

Is Severin's edition a marked improvement? Not really. Compare the two screen shots below.

First, a shot from the Image Entertainment edition: 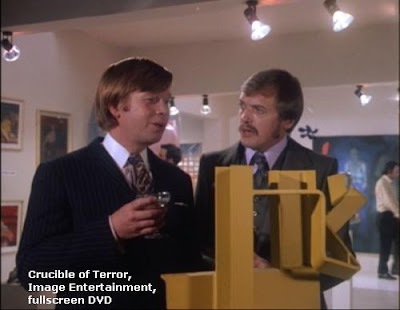 Now a shot from the Severin edition: 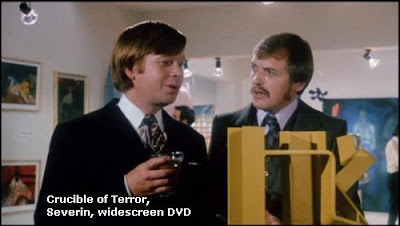 The Image edition shows far more of the top and bottom portions. Some ceiling lights, and the bottom of the sculpture, which are visible in the Image edition are missing in the Severin edition.

The Severin edition shows more of the left side of the screen. More of the paintings are seen.

The Image edition shows more on the right side.

For more about my views on various old and new horror films, see Horror Film Aesthetics: Creating the Visual Language of Fear. This blog represents a continuing discussion of my views on horror, picking up from where the book left off.

Some of my horror film reviews can also be read at Communist Vampires.
Posted by Thomas at 1:30 AM