Dual Use of a Wide-Angle Lens in "The Concrete Captain"

Wide-angle lenses expand space. If the lens's angle is wide enough, it even noticeably distorts space. Horror films have found many applications, both aesthetic and pragmatic, for wide-angle lenses. Among its uses, a wide-angle lens can...

* Depict the subjective POV of a person who's drugged, drunk, tired, or insane.

* Depict the subjective POV of an unnatural creature (e.g., a ghost, alien, demon).

* Suggest an ominous, alien, or supernatural presence or situation.

* Photograph everthing in small rooms or tight spaces (low-budget films can rarely afford to rent a professional studio in which the camera has enough space to pull back to photograph a scene).

* Expand space so as to suggest a larger setting. (Realtors also use wide-angles lenses for this purpose -- ever notice that houses, lawns, and backyards often look bigger in their Zillow photos than they do at Open House?)

But especially admirable is when a filmmaker achieves more than one aesthetic effect from a wide-angle lens. Such an application may be referred to as being aesthetically efficient.

It is because of its aesthetic efficiency that I admire this shot from "The Concrete Captain," an episode from TV's Ghost Story/Circle of Fear. 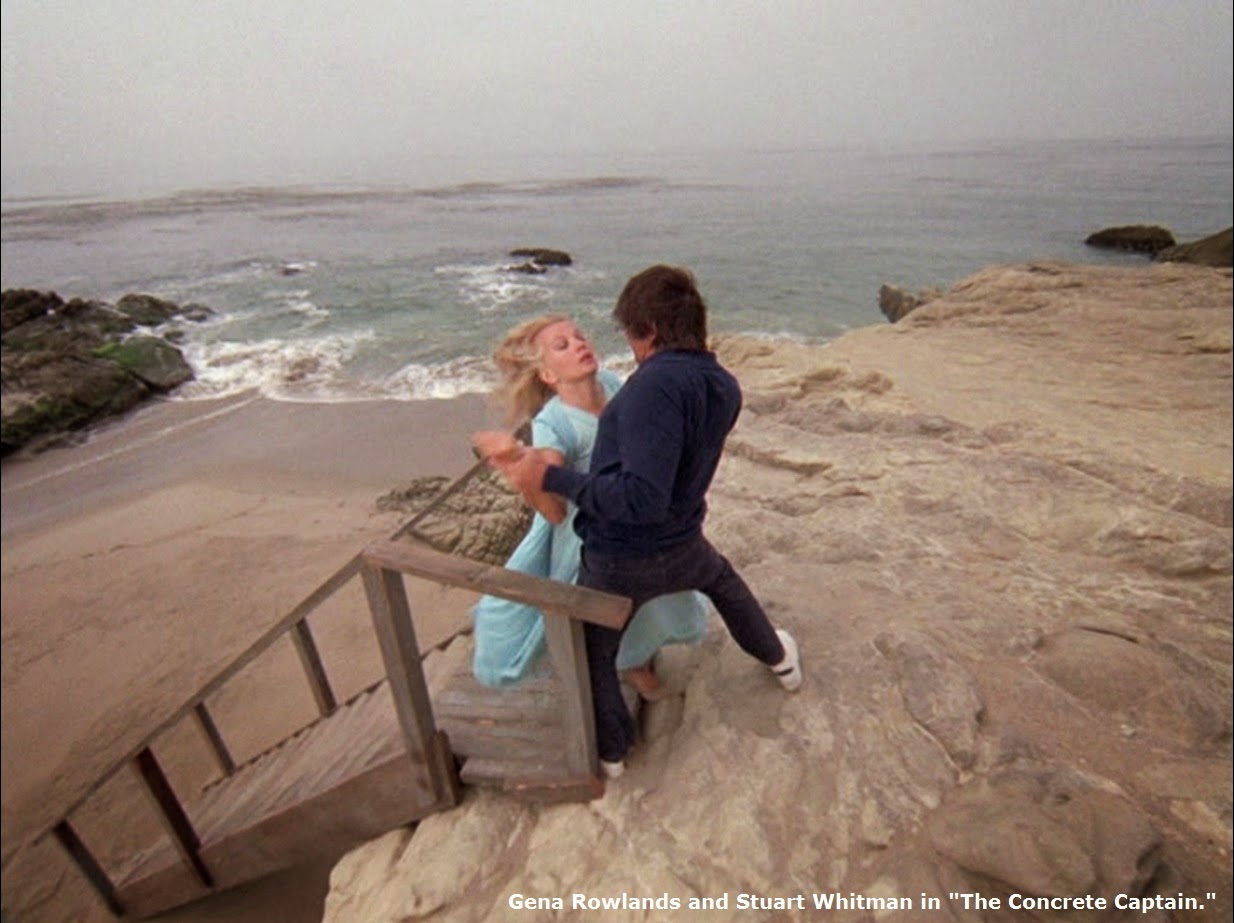 In the above scene, a ghost possesses Gene Rowlands, compelling her to come out to the beach. Her husband, played by Stuart Whitman, catches up and tries to bring Rowlands back to the motel. They struggle at the top of some stairs.

The wide-angle lens in this scene achieves two effects.

For more about the use of lenses in horror films, see Horror Film Aesthetics: Creating the Visual Language of Fear. This blog represents a continuing discussion of my views on horror, picking up from where the book left off.
Posted by Thomas at 1:24 AM No comments:

Poor Staging of Actors in Evidence of a Haunting

One of the film director's jobs is to stage the actors -- to instruct them on where to sit or stand, where to look, when to notice each other, etc.

Staging is a fine art, the search for a delicate balance. It's rarely a good idea to over-direct the actors, directing their every smile, frown, head tilt, eyebrow lift, shift in tone of voice. Then the actors feel like constrained marionettes, denied the freedom to "find their character."

But neither is it a good idea to just dump the actors on set, and leave them milling about, without any instruction or direction. This is especially true if one is working with amateur actors, because they lack the training to behave appropriately without direction.

Evidence of a Haunting, yet another fictitious horror film about "true-life TV ghosthunters," provides an instructive example of inept staging.

In this scene, our team of ghosthunters go to their next investigation, a haunted suburban house. We see our ghosthunters outside the house, approaching the front door... 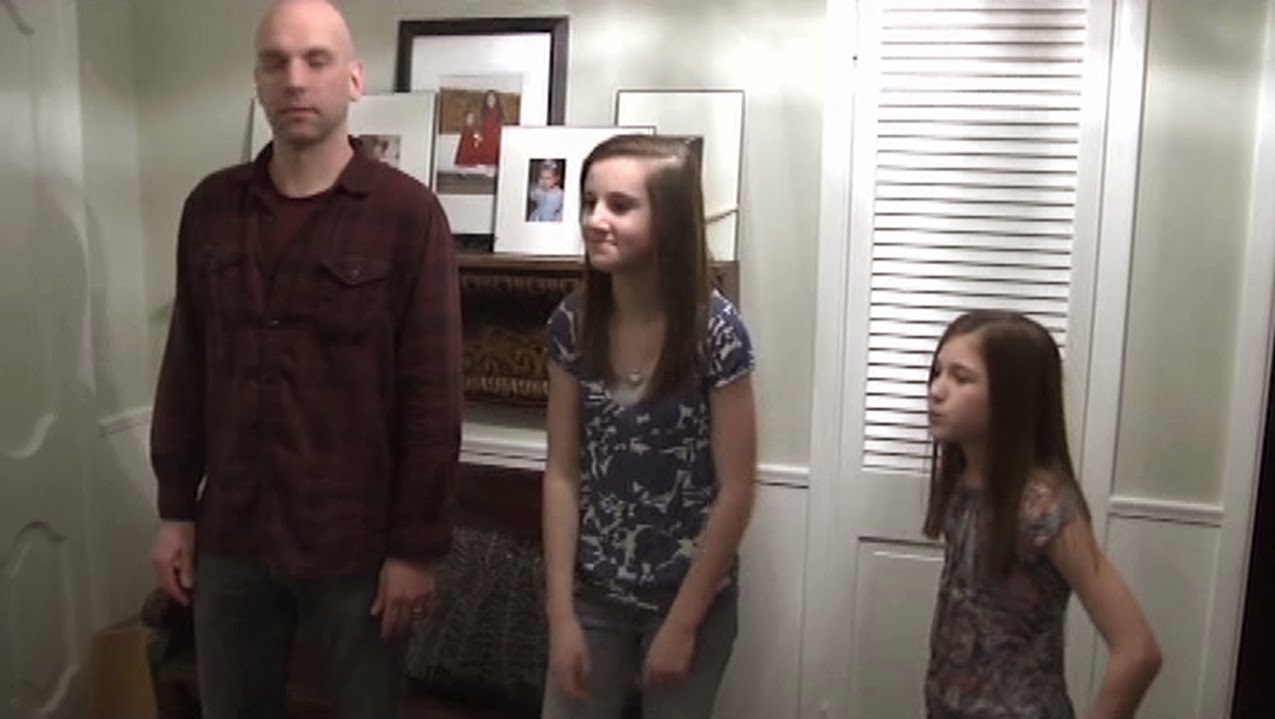 We then cut to this (above) shot of a father and his two daughters, standing like mannequins in the hallway, doing nothing very much. Apparently the director placed them in the hall, because soon the doorbell will ring, so they must be prepared to open the door.

How does this family know the ghosthunters are soon to ring the bell? Were they standing in the hall for the past several hours, just waiting for the doorbell to ring?

I also love how the father has his eyes closed, the older daughter slouches while smirking and staring at nothing much, and the younger daughter looks bored.

Well, of course she's bored. You'd be bored too if you spent your evenings standing in a hallway waiting for someone who is expected to arrive sometime over the next several hours.

As for the older daughter, I suppose she's smirking because she's so excited to be in a movie. It's anyone's guess why the father fell asleep. 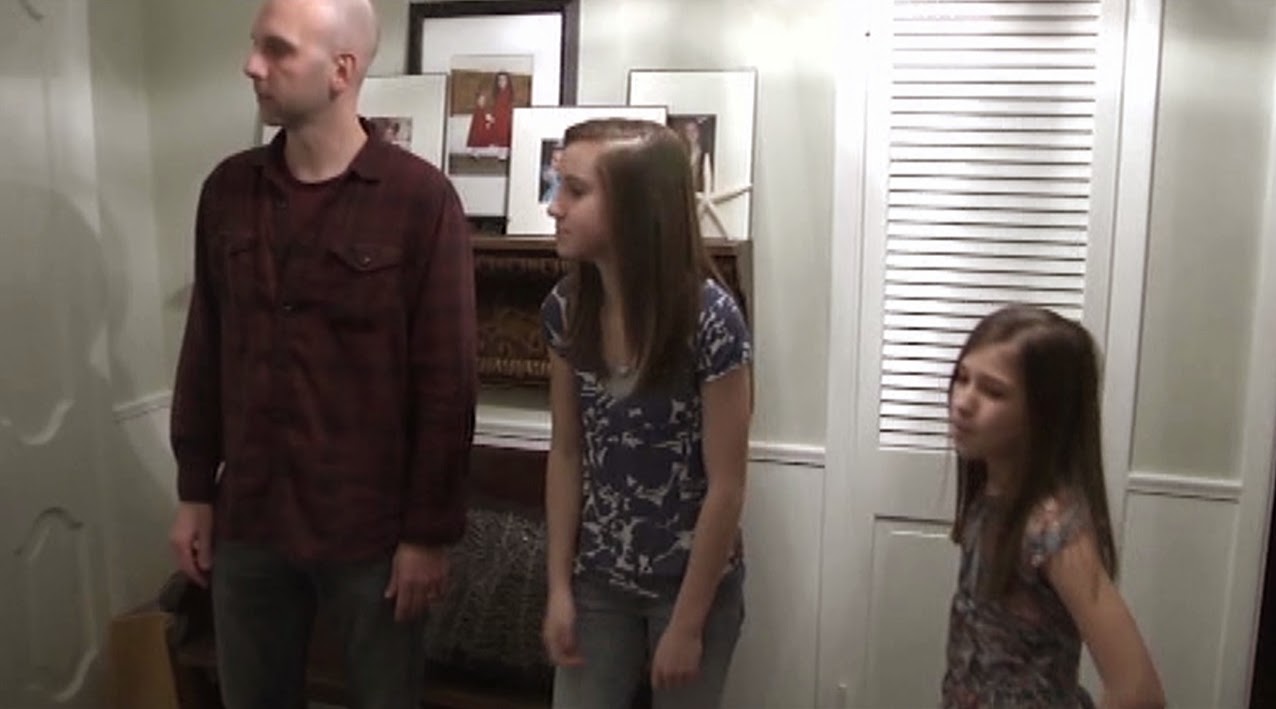 Now the doorbell rings, bringing the father and older daughter to life. The younger daughter is a little late to react.

Perhaps this shot is taking a long time to finish. Young children bore easily. Amateur child actors are no exception to this rule. 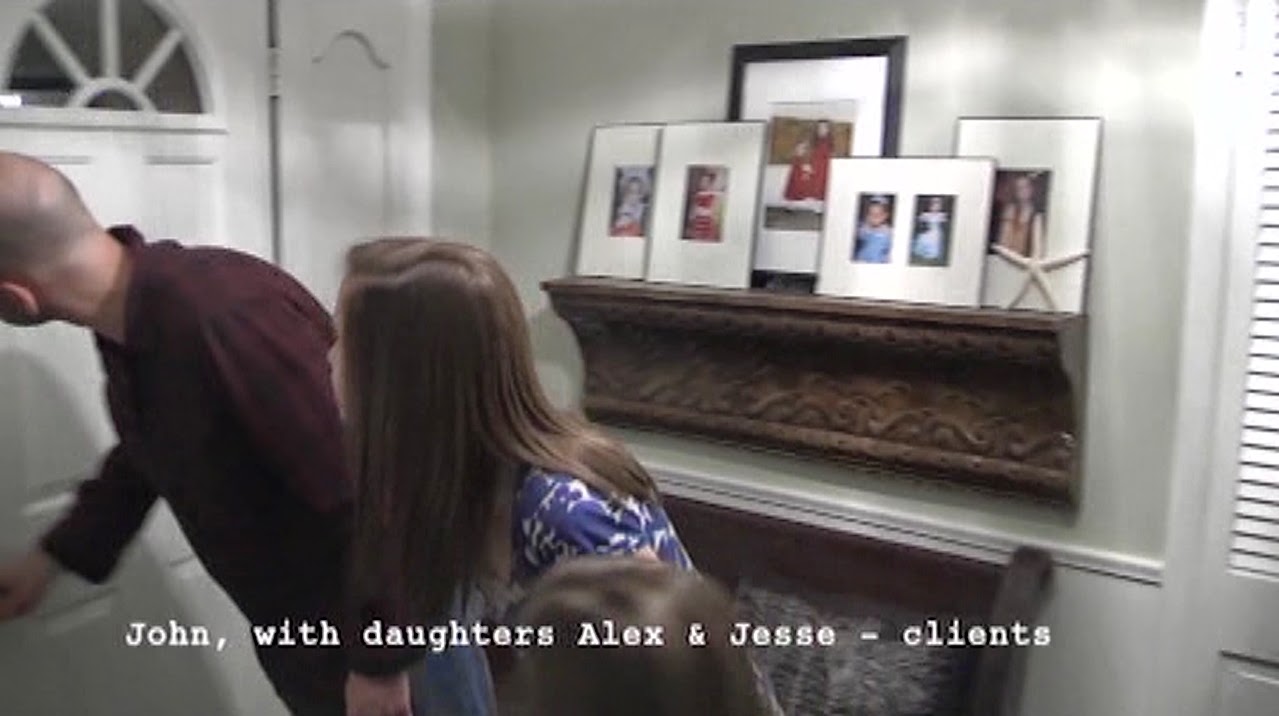 Even so, the younger daughter comes alive in time to lean in unison with her family, as everyone prepares to see who's out there. The family that leans together stays together.

Captions now also provide their names, identifying them as our ghosthunters' clients. 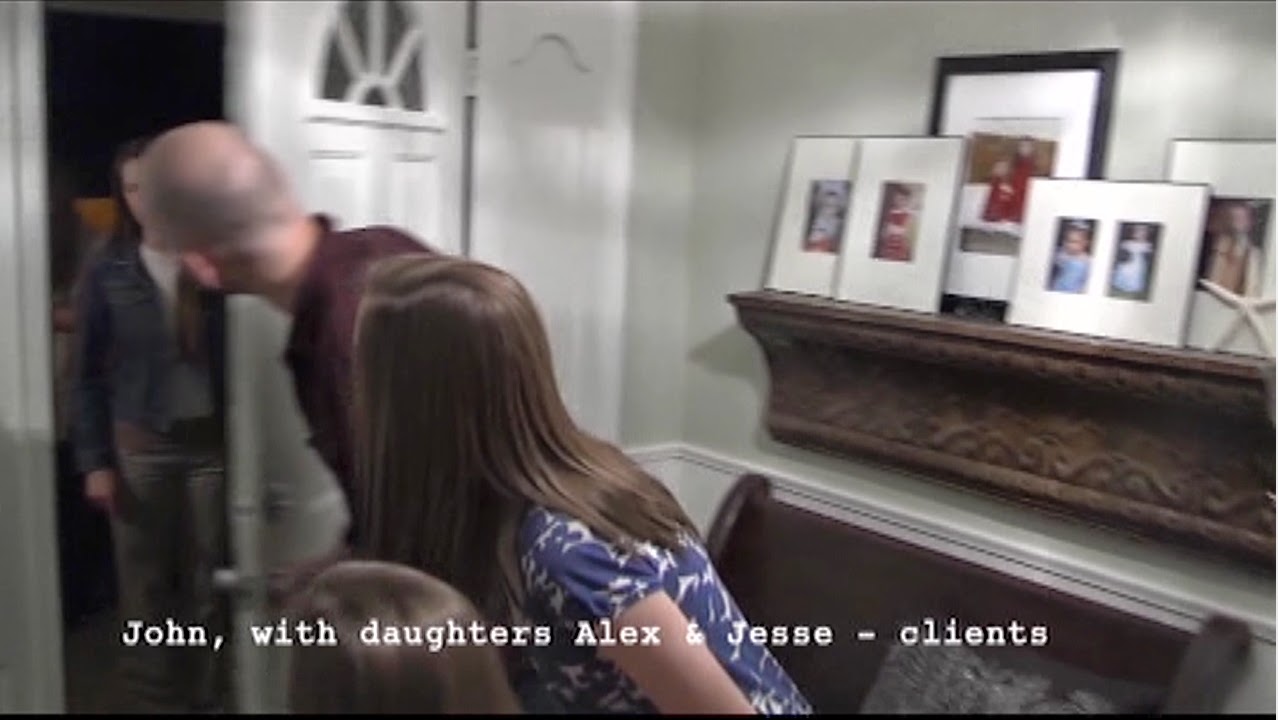 And our ghosthunters are outside! They enter and everyone exchanges the usual banal pleasantries.

This shot is poorly staged, poorly directed, and poorly edited.

* A better alternative is for the actors to have been staged off-camera, as if they were busy living their lives elsewhere in the house. They should have entered the hallway only after the doorbell rings.

* Even better if only one of them enters the hall to open the door. Otherwise it's a light bulb joke. How many clients do you need to open a door? Three. One to turn the knob and two to lean over and watch.

* Another alternative would have been to delete this shot entirely. Why not just cut to an exterior shot of the house, followed by our ghosthunters already interviewing the clients inside the house. It would have quickened the pace. As it is, this shot is not only poorly staged, it is superfluous, in that it doesn't add anything necessary to the film.

For an example of good horror staging, see my post about "Legion of Demons."

For more information about staging and editing in horror films -- see Horror Film Aesthetics: Creating the Visual Language of Fear. This blog represents a continuing discussion of my views on horror, picking up from where the book left off.

Posted by Thomas at 4:24 AM No comments: